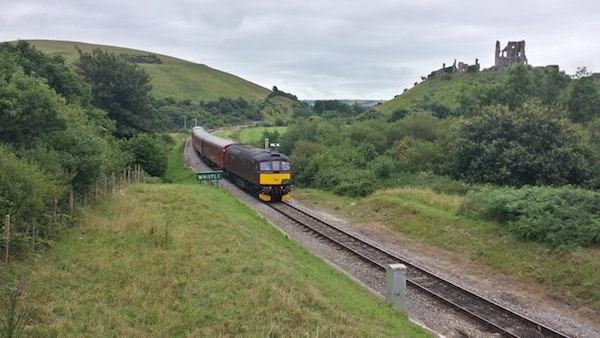 Earlier in the year we published an article on the new Swanage to Wareham service The 2017 trial diesel service between Swanage and Wareham finished on Sunday 3rd September 2017 and here is a statement from Mark Wooley, Director at the Swanage Railway Company.

“The full reinstatement of this fine branch line has been a 45 year struggle. The culmination of this effort – by many dedicated people – has only been possible through capital grant aid in recent years totalling £5.56m received through the Purbeck Community Rail Partnership (PCRP) from local authorities, the Department for Communities & Local Government’s Coastal Communities Fund and from oil giant BP.

A sizeable proportion of this (£3.2m) was invested by Dorset County Council and Purbeck District Council in Network Rail’s recent Poole to Wool re-signalling scheme which ensured passenger train access to and from the Swanage branch at Worgret Junction, and avoided prohibitive standalone project costs at a later date.

This level of investment represents a great act of faith in the long-standing project to reinstate a Swanage to Wareham train service and is very welcome. However, whilst the sum involved is large by heritage railway standards, it is something of an exceptional case and also far below the levels of investment required to implement a full service in the short term; a situation that, by coincidence, Christian Wolmar laments in his article in the same edition of RAIL.

It is also important to bear in mind that, vital though this grant aid has been to the Swanage Railway and the PCRP, the new service is being operated without any revenue support. Under the terms of a recently signed 99-year lease with Dorset County Council (owners of the freehold of most of the Swanage branch), the Swanage Railway has been obliged to operate a two-year trial service on 60 selected days in year one and 90 selected days in year two.

In year one, the service comprised four return trips a day at two-hourly intervals and was delivered as cost-effectively as possible by utilising a single staff shift and an integrated fare structure. Mindful of the need to avoid fare abstraction, the latter has been well received by many passengers because it allowed the ability to break a journey at Corfe Castle before travelling on to Swanage by heritage steam service. The fare, which for many was discountable, never attracted serious concerns.

The new Swanage to Wareham service is by definition a limited trial and will therefore not be optimal from the outset. We are very pleased with the first year of the trial service and our official footfall figures indicate a total passenger figure of over 13,000 for the 60 days of operation. This compares well with the PCRP’s target of 12,000 passengers.  Surveys indicate that a high proportion of our passengers arrived and/or departed from Wareham by rail.  Feedback received from South Western Railway tells us that Wareham station ‘entries and exits’ data for the 12-week period of the trial shows a significant increase over the same period in 2016.  This was a key objective of the new service and is something to be proud of.

We look forward to delivering a 90 selected day trial service in 2018 and it is likely that there will be changes to the timetable and additional discount schemes made available for this.”